A blastocyst is an embryo at an advanced stage of physiologic development when there are two cell types present: one group of cells that form the placenta, and another group of cells that form the fetus. Advances by our superb IVF laboratory staff have been able to provide the proper nutrients to grow embryos in the lab to this advanced stage of development. The further developed the embryos, the better your ability to select the most viable embryos and ability to transfer a fewer number of embryos. This will allow us to maintain or raise pregnancy rates while reducing the number of embryos transferred, thereby reducing the most significant complication - multiple pregnancy.

What is Blastocyst Transfer?

What is a Blastocyst?

A blastocyst is a highly differentiated, highly developed embryo that has grown to the point where it is ready to attach to the uterine wall (implantation). In naturally conceived pregnancies, the egg is released from the ovarian follicle and picked up the fallopian tube where it is fertilized by sperm. The resulting embryo starts out as a single cell, which then must grow and differentiate until it has the capacity to attach to the uterine wall. The embryo divides from one cell into two cells, then four cells, eight cells, 16 cells, etc. until it reaches several hundred cells at the time of implantation and reaches the blastocyst stage on day five or six after ovulation. The term "blastocyst" is a descriptive name to identify the developmental stage of the embryo. A single cell embryo is called a 2PN zygote (for 2 pronuclei). The 2PN zygote divides into an embryo (2-4 cells), the "morula" approx. 16 - 32 cells) and finally a "blastocyst" embryo. The embryo spontaneously "hatches" from its shell (zona pellucida) at the blastocyst stage of development and is ready to attach to the uterine wall.

Why are Blastocysts Special?

A blastocyst embryo has reached a stage in development that requires activation of the embryo's own genes, called genomic activation. Genes are chemical codes that make us unique. When a sperm and egg fertilize the resulting baby is a mixture of the genes from the mother and father. This mixture creates a child who is unique and different from mother, father, or siblings. During early growth of the embryo, all of the energy and chemicals required for cell division come from the mother's egg. In order to continue to develop past the third or fourth day of life, the embryo must activate its own genes to produce energy for further cell division and differentiation. Sounds simple! Although this biological process is critical, it does not occur as easily as we might hope. Approximately one third of embryos are capable of successfully activating their genes and growing to the blastocyst stage. If an embryo reaches the blastocyst stage, nature is telling us that it is a healthier embryo and it has a better chance of implanting successfully and resulting in a normal, healthy, baby.

How was Blastocyst Transfer Developed in the Field of IVF?

The basic physiology of embryo growth and development has been known for many years and using conventional IVF techniques it was known that embryos were transferred into the uterus earlier than was physiologically normal. In pregnancies that are spontaneously conceived, the embryo grows and divides in the tube for several days and does not reach the uterus until after the third or fourth day of development. This was the rationale for developing tubal transfer procedures like GIFT and ZIFT. Early attempts by investigators in the IVF laboratory had not been able to develop laboratory culture media and incubation techniques to successfully allow a good number of embryos to grow and develop to the blastocyst stage. Investigations in the 1990s identified that the nutritional and metabolic needs of the embryo changes as it leaves the tube and enters the uterus. This simple observation lead to the development of "sequential culture medias" which change to accommodate the changing needs of the embryo. This breakthrough allowed for the successful growth of embryos to the blastocyst stage.

How Does This Help Couples Achieve Pregnancy?

In conventional IVF, embryos are grown for only 2-3 days before they are replaced into the uterus. The embryos have between 4-8 cells inside the shell (zona pellucida) and must continue their growth and development inside the uterus for 4-5 more days before they become blastocyst embryos and are ready to implant. If a couple produce many embryos in an IVF cycle, the embryologist, no matter how skilled, cannot really tell which embryos have the capacity to grow into a blastocyst embryo and which do not. By selecting a group of embryos for uterine replacement (embryo transfer) on day two or three after ovulation, it is too early to be certain which embryos are capable of blastocyst development. This is why conventional IVF is usually done by transferring 2-3 embryos. No one hopes that all of these embryos are going to implant, but recognize that maybe only one or two have the ability to form blastocysts and succeed in developing into a normal pregnancy. Keeping the embryos in the IVF laboratory for another 2-3 days allows blastocyst development and allows you and the IVF team to identify the best embryos for replacement. Now this is where the good news comes!

How Do We Reduce Our Risk of Multiple Births?

By letting nature tell us which embryos are best, it is possible to obtain very high success rates by transferring only a few embryos. We routinely transfer only two blastocyst embryos and, in patients who develop healthy blastocysts, have an ongoing pregnancy rate of greater than 50% per transfer. When only two embryos are replaced, the risk for triplets or quadruplets is essentially eliminated. Our experience with blastocyst transfer has changed the way that we counsel patients with strong concerns about multiple pregnancies. This technology is particularly useful in certain circumstances, like egg donation, where large numbers of high quality embryos are available. In our egg donation program, using blastocyst transfer has increased our success rate to more than 80% per transfer.

Why Not Blastocyst Transfers for Everyone?

Not all laboratories have the quality or capability of culturing embryos to the blastocyst stage. The experience and expertise of the embryology staff is an essential ingredient in creating a team approach to maximize pregnancy success while minimizing the risks of multiple pregnancies. Blastocyst culture does not transform a poor embryo into a good embryo. There may be some couples that do not create embryos with a high quality. In these couples, blastocyst culture and transfer can allow the IVF team to observe how these embryos grow and potentially identify reasons for previous treatment failures. However, there may be couples who cannot create embryos which successfully reach the blastocyst stage and embryo transfers may canceled when embryos fail to continue to develop normally. This information may be extremely helpful as couples explore other options to rapidly achieve their goal of parenthood.

Why Does the Blastocyst Stage Have a Higher Implantation Rate Than Day Two to Four Stage?

Not all fertilized oocytes are normal, and therefore a percentage always exists that are not destined to establish a pregnancy. The majority of such abnormalities are chromosomal. It has been determined that around 25% of eggs are chromosomally abnormal, and that this problem worsens with maternal age. The culmination of this is that many abnormal embryos arrest or stop growing during development. So by culturing embryos to the blastocyst stage, one has already selected against those embryos with little if any developmental potential. Therefore, a blastocyst has a higher probability of developing into a baby after transfer to the patient. Data on the replacement of human blastocysts on day 5 or 6 of development indicate implantation rates twice that of cleavage stage embryos have been reported.

A second reason for the increased implantation rate of the blastocyst is that the blastocyst is the stage of embryonic development that should reside in the uterus at implantation. As the environment within the fallopian tube and uterus differ, blastocysts are much more suited to survival and development in the uterus. As a result, enhanced or equally successful pregnancy with blastocyst transfer is achieved with fewer embryos and a reduced incidence of multiple births.

“Every person that we came into contact with was kind, friendly and knowledgeable.” — SDFC Patient 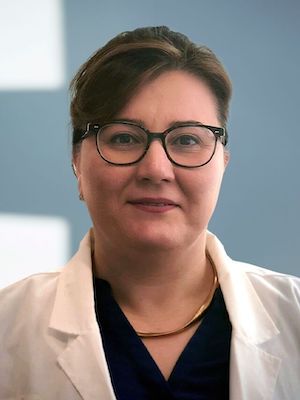